This past Sunday, I got my friend Wendy’s computer cleaned to the bare system and meddled with her request to have the system running Windows XP again. It took me a few hours to get it going but once all was well, it was grand. Wendy felt bad that I didn’t drink too much on my charity effort and wanted to do something a little more classy for me. She remembered that at the offices of ZeroXR, all I just had was a bottle of Yamazaki 12 year old whiskey and remembered I was trying to keep it only for special occasions… Well last night she ended up presenting me something far too kind for anyone who’s a fan of me as a friend or my site. 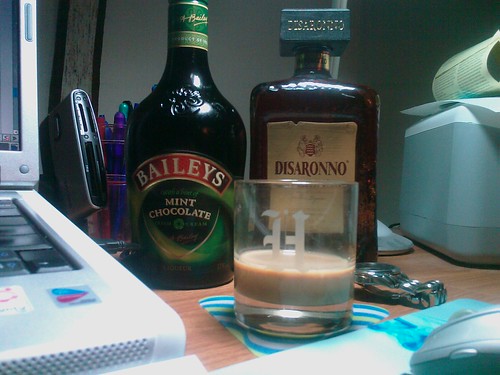 I was rewarded with a 750mL bottle of Disaronno Amaretto and a 750mL bottle of Bailey’s Mint Chocolate Irish Cream. I didn’t have much to drink earlier in the night, but it was spectacular to finish a night of consoling a few of my very close friends with romantic problems to have those bottles in my hands. The Disaronno I have had, however, the Bailey’s was rather new to me. I decided to have some in the safety of the office of ZeroXR after hours over ice. The silky dark chocolate laced with a refreshing hint of the mint made it stunning to behold. The best way to describe it be comparing it to a drive in a very windy mountain road with the top dropped down and the temperature of the air being 70F to just relax in simple opulence.

The two new bottles of liquor have earned their place as part of my stash of thinking liquors. By thinking liquors, I mean products that will be a “staple” for when I am buckling down hard on meaningful posts for the site and that could definitely use something to unwind and unlock my potentials. Yamazaki is purely too special to be squandered away… That’s for truly joyous occasions. Bailey’s and Disaronno however are wonderful pleasures that aren’t too difficult to buy.