Before I turn into a pumpkin and meet sweet slumber… I think I may make a custom build and archive it to XDA Developers as a build for their “ROM Kitchen”. The build I have formed is stable, functional, yet beautiful. It is a fusion of the OEM HTC TyTN II Windows Mobile 6.1 build with bits and pieces obtained from the HTC Touch yet in a balance that is simply lean and minimal in lag. I can definitely post details of my build for those who wish to replicate it and I hope to also obtain screen captures of my Kaiser in action.

I do know one thing… I will definitely need a name for my build, should I go through with archiving it and making it available for public consumption. As much as I love Shinra from Final Fantasy 7’s fame, I can’t call it the “Shinra Enterprise Mobile Device” build due to legal copyright trademarks and all the legal mumbo-jumbo. It will have to be based on the ideals of my website, surely. If anyone has ideas for a name, feel free to pitch a comment up!

With this… I bid thee adieu!

Many of you will remember my post detailing on how much I loved my router after doing the Tomato firmware injection for my aging Buffalo router. Today was a charity challenge that I took upon myself. Sol was back in town and we were due to hang out together with regards to family… so I would spend some time with family and him. When we arrived back at his home residence, I wanted to check out his router and see if it was a possible candidate for the Tomato Router upgrade.  To my dismay… He had a Version 6 of the WRT54G router.

I was in dismay, but I remembered that the folks at DD-WRT had their own custom firmware of their own. Much like my Buffalo router, the WRT54G v6 router does not want to play nice with custom firmwares unlike any of its siblings from v1-v4. The DD-WRT community is rather good with resources, so they have this helpful link from Bitsum on how to inject the firmware into the router. To sum up the steps:

After I did the injection… Sol noticed a slight increase of his internet speed. Obviously, the next step was to hook him up with OpenDNS to protect him and my auntie from phishing sites and other malicious attack sites as well as speed up the backbone of his connection. The procedure only took 5 minutes over all and once again was totally worth the effort. My hack attack urge was satisfied and the best part… I got to make Sol’s return a fun one. Hopefully his online gaming addictions or even YouTube addictions much easier to palate for his connection.

For those about to do the jump to inject DD-WRT to their compatible routers… Just take a note from me when I did the Tomato router hack about the MAC addresses. Take down the MAC addresses for your router and keep them on hand, the DD-WRT hack does change your MAC addresses so you will have to “clone” them to restore them back to the original ones so you don’t have to fool with calling your broadband provider to have them release your “old” router’s address.

So I decided to potentially put a bullet into my router in an attempt to “roid up” my router. Why? The poor thing is almost 5 years old and it lacks a lot of things that are great to have when you live in a home where sharing the web and trying to function without killing another person for bandwidth. That and I didn’t want to make an expenditure that would be taken for granted.

My buddy Maczimus would tell me about how his newly upgraded Tomato router has been just awesome to him. On reading their compatible routers, I found that my Buffalo WBR2-G54 is compatible for the upgrade! So Maczimus had challenged me to upgrade the router to enjoy the web again and have less bandwidth showdowns with my sister and her YouTube addictions.

First off, for the Buffalo routers, there’s a bit of trickery involved… Buffalo encrypts their firmware to prevent unauthorized firmwares being installed to the router. The upgrade cannot be done wirelessly, it must be done while you’re hardwired to the router. I highly advise downloading the Wikibooks Manual to the Tomato router as it details the EXACT procedure to fool the router and inject Tomato into it if you’re using a Mac or Unix/Linux machine. Windows folks have it easy with running a .bat file, so no funny messes for you all. After the router does its thing and processes the upgrade… It will kick you out and then ask you to reauthenticate the session.

After providing the user name and password, you’re welcomed into a web interface that’s powered by SVG images. The interface is simple and to the point. The fun part is being able to tweak and tune values. From your basic settings like security settings to even things like the amplitude of the wireless antenna! The amplitude is far from “just a number” as with tweaking it, I have found that I am able to make it so there is no dead spots in my family’s home. That’s a seriously cool feature!

The bandwidth monitoring features are almost something that you would overlook, but to see where the bandwidth is going and from what computer or internet device is amazing! The ability to do a Quality of Service (QoS) lockdown is very nice as it can solve some of the more severe arguments because it effectively balances out the bandwidth in a fair manner. This is something that any bandwidth heavy families or small businesses should have, because it is simply that good!

I will make one caveat aware. Make sure you know the default MAC addresses of your router’s interfaces. On upgrading to Tomato, the firmware changed one hex digit of the last pair and Verizon had a panic attack. They wouldn’t let me on until I changed the address to the proper one.

The next step to perfecting my newly created Tomato router was to change the default Verizon powered DNS addresses to the OpenDNS addresses. The OpenDNS configuration is easy and free to anyone, although signing up for an ID allows you remote control of your network. Control being things like the ability to filter out sites of your choosing or even blocking out sites that are potentially dummy sites set-up by phishers. The benefits of using the OpenDNS addresses rather than your internet service providers are that they can resolve mistyped web addresses much quicker and even suggest similar sites more efficiently. The change of the DNS address is such a small thing, but it is seriously worth it for the light boost in speed. Combined with the Tomato router, it’s a combination that has made broadband sharing at home a much more pleasant experience.

The only thing left to make browsing even better is to get my family to consider upgrading to FiOS by Verizon… The speeds below with the Tomato router and OpenDNS have opened up the gateway. Hell, I wish they’d consider my offer to pay for the upgrade myself… 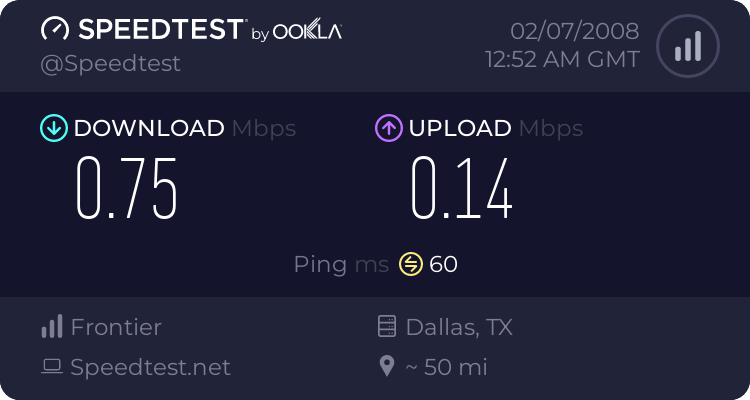