Lately, I have had some of my fans a little upset that I haven’t been hammering away articles like a relentless machine… A lot of things have happened that I have had to “realign” myself and even balance out my mind. A good deal of people have been rather supportive of me which has helped expedite the process of rebalancing and realigning. My thanks this week goes to Sol, Rei, my Twitter fans, Yamcha, and my newest outspoken fan, Pistol. They all have kept me laughing, smiling, and most of all… having a great time!

Monday, everyone heard about me taking my aseptic training final. I was so sorely reminded of almost 3 years ago when I took the PTCB test… I took the 20 question test and finished it within 15 minutes. It scared me like my PTCB event… I walked alone but instead of waiting for the anticipation of my scores turning out in 3-4 weeks, I was able to get instant gratification knowing I passed. The night ended it a few rounds of celebration with Yamazaki.

Tuesday, I actually decided to go to extremes with my phone. I had grown rather fond of the _Alex_ ROM based in Windows Mobile 6.0 on my phone, but I couldn’t deal with the fact that sometimes the system was just awful slow at times. I wanted to have my phone as streamlined as possible but also have the cool “tricked out” features like the HTC Home screen, TouchFLO, and the HTC Cube. So I decided to do the most insane phone hacker thing in the history of my ownership of phones… I was going to build my phone completely from scratch. Naturally, I would have to get a “foundation” to build from… Thanks to the folks at XDA Developer’s Wiki on the Kaiser/Tilt, they had a link to the newest OEM ROM build for the HTC TyTN II using Windows Mobile 6.1. I would take that ROM and begin streaming the build into my phone… However, I had a snag that almost turned my phone into a paperweight… The ROM flasher utility had a hick-up and there was a warning that I needed to obey specific instructions to save my phone from being dead. I abided and given the blessing of whatever electronic deities were watching me. Eventually, the upgrade would finally finish and it would be grand. Everything from the unbranded HTC TyTN II was all there, but even though there was a tinge of the HTC TouchFLO control it was not quite my vision of the phone I had. I would have to add in the hacks and tweaks to give myself the HTC Cube, increased TouchFLO sensitivity, and even “steal” some elements from the wonderful HTC Touch. After finally getting that all set-up, it was time to restore use of my TomTom Navigator 6 to finally get a phone that is completely minimal of extra “features” for a device that simply works.

Most of the week was spent toiling about homework that I had to take care of at the office. I can assure you it was very boring and time consuming. I savored being able to put aside my homework to relax at the offices of ZeroXR, believe me.

Friday, Sol and I had quite a fun lunch. We hit up BJ’s Brewhouse in Dallas for some good Chicago style deep dish pizza and ice cold, hand made, draft root beer. We decided to do things proper with getting what I called the Death Pizza! I will say, it was quite savory and even meritted a laugh! The root beer was delicious and made the heat index of 95F feel like nothing.

It’s the pie that is all sorts of evil and chaos… BEHOLD! 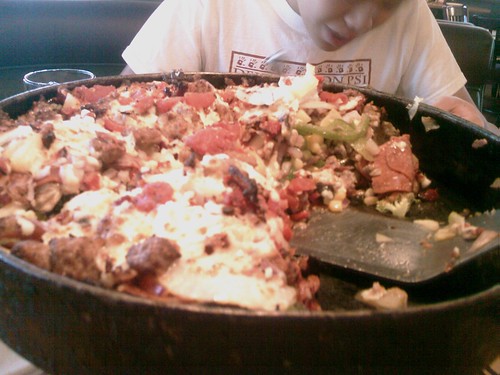 Some of you are probably curious on what was on this monstrosity. Well… See the below list:

That’s right… TWENTY THREE TOPPINGS! The best part… it was a complex painting of flavors. You had the savory, sweet, spicy, and salty all in one shot. It was full of awesome and deliciousness! The decadence is beyond anything I know or am aware of.

I also decided to give my footware an upgrade, because the lack of an arch in my shoes as well as a worn out tread on the soles. I decided to make a bit of a spendy purchase for the sake of my feet and opted for the Nike Pegasus+ 2007 from the Nike Factory Outlet in Allen.

Pegasus+ from the side 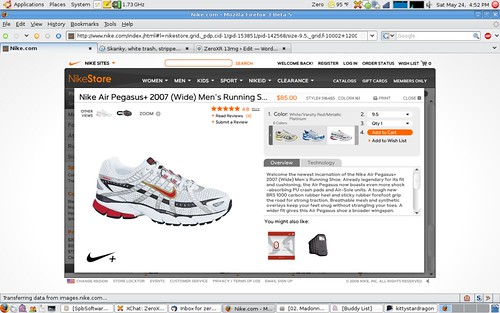 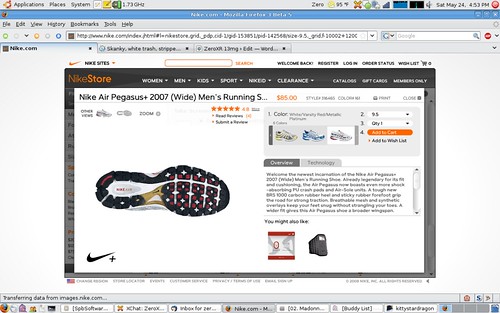 Usually, I am not one to analyze my step pattern, movement forms, or even the tread patterns of shoes… but this time, I decided to take into account that I do run a lot. On top of the running, I do a lot of jumping and sliding around so I do need something that can cushion the shock of my running, jumping, and slides. I am decided to at least take a new approach to my feet. So far with the running I was doing today, I have been glad I spent a little bit of cash to help myself out. The shoe is classified as a “4E” wide pattern. Much like sports car tires, the Pegasus+ 2007 shoes have a wide traction patch that allows for optimum contact with the pavement and great launching from dead stops.

This Memorial Day weekend looks boring with respect to how things are unfolding. A lot of my friends are either silent at me (for what reasons, I have naught a single clue) or broke from the skyrocketing gas prices. I will just declare that I am open for hanging out, just not today. I promised one of my ZeroXR 13mg fans a personal phone interview so I shall be at home until my phone call strikes my phone. If you don’t have my number, feel free to ask and I will pass it on… or if you’re a cool kid, make it out to one of my “meet-n-greet” events and I’ll hook you up with one of my collectible business cards. 😉 Disclaimer: Said business cards are not collectible, not until I can design and budget for a wicked sick set from Moo.

For those who are having a bombastic Memorial Day celebration, grill some hot dogs, burgers, and/or brats for me and kick back a few bottles of beer. As it stands, I don’t forsee any of my local friends doing anything bad ass.

Addendum: I am possibly considering guest editors… If you’d like to try showcasing work with me, send an inquiry to info@zeroxr.com.