Acknowledgement: I would like to thank my friend Maczimus out in Fort Worth for letting me borrow his copy of Windows Vista to do this review. Had it not been for him… I would have no way to shell out the cash just for an operating system I do not intend to use full time.

So earlier you all got to look at images of me playing with Vista from a virtualized environment safe from the confines of VirtualBox for Linux. I won’t lie and sugar coat things… I admire the passion that Microsoft’s art team had when they designed Vista’s interface. It’s an eye pleasing experience, see my “desktop” below. (Click the image to see the full size one) 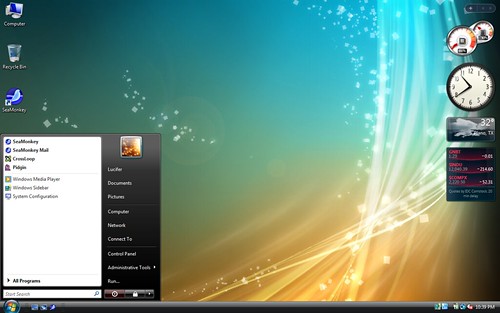 Vista makes for a pleasing operating system to work with, but it is not without some “trimming” that had to be done. I used Windows Vista Ultimate but trimmed down the weight of the OS with vLite to trim Vista’s hard drive footprint from 8GB to a cool 3GB. Unfortunately, I don’t have physical hardware to do a full install of Vista with the Aero effect works as VirtualBox does not support Direct3D just yet… So I cannot say much about that. The Windows Sidebar is much in vein like Apple OS X’s widgets, not too much to write about. The main thing that kills me is that the entire OS even after being thinned out by vLite is that it is seriously RAM heavy and processor heavy. It is not as responsive as Windows XP and that actually depresses me…

I have seen videos like this one (YouTube – Windows Longhorn Concept) which show the raw ideals of what the future Windows operating system was supposed to be. It makes you wonder what happened to the hard development for the OS and why did it become the monster that it is. It’s got the eye candy, the presentation, the “security” of the UAC (I say it with sarcasm) but at too high a cost. Sure, I am not using the “complete” OS… but not everyone can afford the power of eye candy due to hardware. The UAC can get rather bothersome as it babies the user with needless permission requests… I ended up turning it off because it simply annoyed me to death. The best comparison can be made to the UAC… It would be like using Ubuntu Linux and every time you wanted to open up Firefox, Thunderbird, or Filezilla to connect to the web, you’d have to be halted by a Sudo prompt asking for your password every initialization.

For Microsoft, it has hurt them as many businesses have been urged not to adopt Vista just due to sheer cost. Many perfectly great machines on Windows XP or Linux would sing on barely anything… With Vista on the same machines… you’d have to do some serious upgrades just for a tolerable experience. Bumping up multiple systems to 512mb to 1GB of RAM is not a cheap task nor is the other option to completely rebuy new machines for a business. Dell’s IdeaStorm ended up being stormed by angry users distraught that Vista did not play nice with their new systems and it spawned a topic called “Don’t Eliminate XP Just Yet“.

As much as Microsoft wants Vista to take off… I feel it will fall a fate much similar to that of Windows ME. Some of my readers will remember the day when ME hit the market, it almost felt like a rushed bolt-on to Windows 98… To me, Vista feels like a sloppy bolt-on to Windows XP. If Microsoft wants a market dominating OS like what XP is… then I hope that Windows 7 will be much better than Vista and it needs to be true to what Project Longhorn was all about. I wish I could really like Vista, but to need ridiculous requirements just to make it run just decent is ridiculous. I mean, it’s bad when someone can throw in a Ubuntu Feisty disc, load up Compiz-Fusion and do all the eye candy inside a virtual machine when a 1.73 Ghz emulation of a session of Windows Vista can’t due to requiring Direct3D drivers. If Microsoft forgets that there’s a market for users with weak machines… Linux may just steal that emerging market they have fought so hard to build.

Microsoft, make an OS that the masses don’t need to buy a brand new machine or even $200+ in parts just to make it work… or you may just push away former faithfuls like myself to consider alternatives that we don’t even have to spend a dime on. If you care about sealing in your future markets in developing countries… you’re going to lose ground concentrating too much on “cool factor” rather than efficiency and utility.